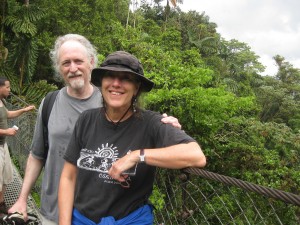 Hanging on the jungle bridge

In Australia, they always say — “No worries, mate.” In Costa Rica, people greet each other with “Pura Vida” — pure life. I believe that when a saying pervades a nation’s speech pattern in that way, it says something very intrinsic about their consciousness. Although the Australians are in many ways similar to Americans, at base they have a much more relaxed attitude towards life.  No worries, mate.  Much more relaxing. In Costa Rica, it’s all about the teeming life that swarms around them. It’s mesmerizing, calmly invigorating, and very in tune with nature. Pura vida.

(What would the saying be for Americans? “Lifestyles of the rich and famous”? “Live free or die”? “Shop till you drop”?)

When I looked up the accepted meaning of Pura Vida online, I found this on Wikipedia:  “Pura Vida literally means Pura = pure and vida = life, but “Pure life” in Spanish would be “Vida pura” instead, so the real meaning is closer to “plenty of life”, “full of life”, “this is living!”, “going great”, “real living”, “Awesome!” or “cool!”.”  From May 2-9, my husband Steve and I had a short but amazing vacation in Costa Rica. (First time we’ve left the USA or Canada since 2005!) And  I definitely agree that being there was a Pura Vida experience. 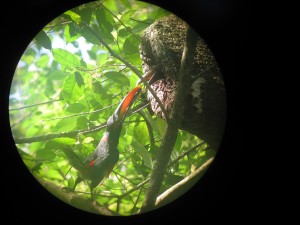 I think that what struck me most about my time in Costa Rica was a pervasive feeling of being embedded in nature. The sounds of  birds were everywhere — day and night. They peeped and trilled you awake and sung you to sleep.  The sounds of frogs and monkeys were there too — especially at sunset. The plants were amazing, literally gushing over.  The mangoes are strewn on the side of the road.

Our lives here in the USA are so pruned and regulated, so boxed and impersonal.  Thank God, Americans are an inherently friendly people, but we’ve generally lost complete touch with the natural world. We are totally in our heads and in our entertainment and in our physical objects. We barely notice our natural Earth world anymore. No wonder we abuse it so blithely. In Costa Rica, the Earth asserts herself. You cannot ignore her. Her top is spread open wide and her breasts are pouring out before you. You cannot help but notice. You are enveloped within her.  You can’t box her up. 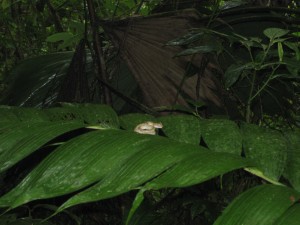 Another interesting thing about Costa Rica is that it is the only country in Central America that isn’t plagued by military shenanigans and warfare. Aside from problems with theft, you are safe. In the mid 1900s the Costa Ricans did something almost unheard of — they abolished their military. Granted, it was done with the understanding that the USA would be their guardians. I guess everything has its price. The result, though, is that Costa Rica went forward and utilized its natural resources for its own development. The main industries are agriculture and tourism. The country is devoted to tourism. They love their tourists and baby them. The roads are slowly becoming more and more developed, people have their cars, their internet, their schools, their universities, and their peace.

It’s a simple life though — a small life. It’s a pretty small country and the ability and money to travel is limited. For the most part, most Costa Ricans never travel outside of Costa Rica —  at most to other Central American countries or the Caribbean. They seem pretty happy with that though.  Their foods are basic and repetitive and healthy. They don’t eat out of a packaged box. Costa Ricans aren’t fat. It seems like a simple life in tune with the outer natural world. It kind of reminds me of my days on an Israeli kibbutz in my early 20’s. You live simply, eat simply, work outside, spend a lot of time with people doing simple human things, and enjoy being alive. Pura vida. 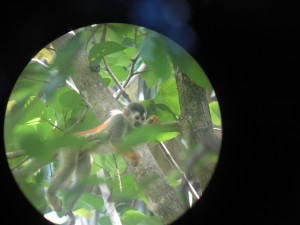 Naturally, most of the things Steve and I did in Costa Rica had to do with nature. We were guided through the jungle over hanging bridges or in kayaks through coastal mangrove estuaries, seeing toucans, macaws, crocodiles, howler and squirrel and capuchin monkeys, sloths, anteaters, vipers, iguanas, tarantulas, agoutis, and leaves that curled up when you touched them with your toe. We soaked in hot springs at night, fed by the nearby volcanic heat and lit up by distant lightning storms. 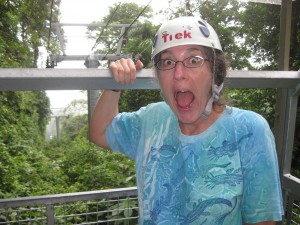 Heading up toward the ziplines

And I faced my own personal fear of heights and of danger in general by zipping across a zipline a half-mile long at 40 miles per hour, disappearing like a spec into a fog that hung over a rainforest valley 600 feet below. I didn’t sleep a wink the night before, but I did feel quite alive. Pura vida.  Not bad for a 56 year-old lady!

Enjoy  the video links below…

Hanging out on the Hanging Bridges near Arenal

Leafcutter ants go about their business

Pura Vida after a soak at the Eco Termales Hot Springs

The sounds of the evening near Manuel Antonio National Park