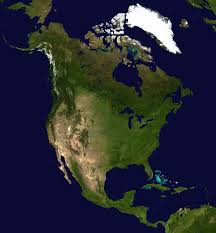 My husband Steve and I just drove across America. It took three weeks as we made our way at a fairly leisurely pace, from California to Nevada, Idaho, Montana, Wyoming, South Dakota, Minnesota, Wisconsin, and Michigan, crossing over into Canada at Sault Ste. Marie on our way to our destination: Bala, Ontario in the Muskoka region two hours north of Toronto.

This was my first cross country trip. I grew up in Buffalo, New York and have flown east and west many times over the years. But now, at age 57, I got the chance to experience the vast distances and, in many ways, deep quiet, at the heart of the American continent.

In Active Consciousness, I discuss the fact that humans are not the only ones who possess an energetic Self. Plants and minerals also have a deeper energetic aspect of their beings. It is well understood by most indigenous people that places have soul energies too. In other words, a country also has a Self. Indeed, astrologers often inspect the charts and forecast the fortunes of nations based on their date of “birth”.

Toward the end of our voyage from California to Bala, I was struck by the inherent truth of these ideas. In particular, America is much like each one of us, with an inner and outer self. Just as our “outer” selves are focused on the busy-ness and rat race of the outer world, the outer edges of America — the East and West Coasts — are swept up in the fast-paced world of form. Indeed, different areas tend to be focused on different aspects of the outer world: New York on business and commerce; Washington D.C. on politics and power; Los Angeles on entertainment; the San Francisco Bay Area and Boston on academics and technology. There are pulsating regions in the interior as well. Chicago might be seen as the heart of America, pumping goods to and fro, while the Gulf area sucks in the life blood of oil into the continent.

In contrast, the interior of America is generally very sparse, quiet, and slow-paced. You can easily feel the inherent friendliness and kindness of the American people there — when the motel clerk calls you sweetie and showers you with a level of attention that you’d never experience in the big city. But in 2013, there is also a quiet desperation. Small towns and even cities are dying or at least decaying. The big box stores and chains lie on their perimeter, but by and large, the original town centers feel empty, the local stores struggling. Meanwhile, the tell-tale casino (not just in Nevada — we saw them in Montana and South Dakota too) invariably casts a seedy pall on everything in its vicinity.

After a drive cross country, it’s easy to see why there are “Red” and “Blue” states. The “Red” states are, in general, losing ground. They have heart and they want to hold on to what they have. But the America of 2013 is pulled to its edges; that’s where most of the energy has gone. That’s where the jobs are. No wonder there’s resentment. And whatever jobs there are in the heartland have been co-opted by outside forces: big agriculture, big energy, big-box stores. Where can people put their personal energies and creativity?

In the current scenario, warrior energy tends to get pulled toward an obsession with guns and the military — you see a lot of that. And the good heart of most Americans pulls them to faith. In the meantime, despair can be found languishing in the casino or other distractions. A very common billboard sign seen all over the interior exhorts the viewer not to turn to using methamphetamines — a billboard message I’ve never seen on the roads of the San Francisco Bay Area.

I know that much of what I’m saying may be a generalization, but I believe that, in essence, what I’m saying is true. Where can the men and women of the interior put their good personal energies? They need a new place to put their heart, ingenuity, and energy — the can-do spirit that built America a hundred or two hundred years ago. Their creative spirit has to be reignited. They need to feel like they are building something once again.

When each of us, on a personal level, faces despair and ennui, we also face the same problem. A good first step is to turn within, to meditate, to develop a deeper awareness. The next step is to find a new purpose, a new intention, a new personal quest for creativity. Then we must set our intention and create it — perhaps using active consciousness.

I can imagine this happening in a small town in the heartland. The people of the town need to come together and go within themselves. They must create a collective vision for their town. How can they become self-sustaining? Perhaps they can create a town that is completely self-sufficient without the need for outside commerce? Or perhaps there is some form of local agriculture or unique commerce in which they could excel? Perhaps it is a certain kind of crop or an object that could be manufactured. Maybe they can build a solar or wind farm that generates energy they could sell. Maybe it’s a certain type of activity or art form or attraction that could generate tourism. Each place must find its heart’s desire, its reason for being, its life goal. Once determined, the energies of the town would likely be rejuvenated by the desire and will to manifest it.

I believe that this kind of transformation must come from within. The federal or state governments might provide a helping hand in such efforts, but towns and even cities across America must find their purpose on their own — just as each one of us must find it for ourselves. The interference of big corporations would also definitely be counterproductive, just as it would be if some outside force told you what to do with your life.

Indeed, this notion of personal industry is starting to become manifest in various movements growing all over the world. Examples include eco-villages, intentional communities, and families engaged in “back to the land” activities like radical homemaking.

I find myself very drawn to these ideas lately, and I plan to explore them more in the future for myself. I believe such movements may be the key to reinvigorating the Self at the heart of America. Indeed, all of us who live on the busy coasts of the continent need to take note too. We are all part of the body of America. We are all feeling the creeping despair. Everything is connected. It is time for each person and community to go within and find its vision and purpose.