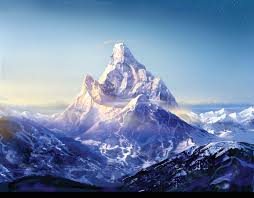 I admit it: I’ve always been a driven, goal-oriented person. That’s what modern society molds all of us to be, and in general, I have always been good at fitting that mold. For most of my life, my goals have always been clear and I found it quite natural and fulfilling to pursue them. I didn’t wonder what to do next, or what I really wanted. First there was school, a PhD, then there were jobs. And marriage. And motherhood. There were my hobbies too — painting and other arts and crafts, music, even singing in a rock band. Striving for something had always been my “raison d’etre” — my reason for being.

But suddenly, after my book Active Consciousness came out, I didn’t have a burning desire for any goal. I was in my late 50’s, and for the first time in my life, nothing was calling to me.

Some of it was time of life. My kids were now grown — they had finished university, were out in the work world, and not coming home much anymore. My mom had passed away and I had already settled her estate. I had also been on the board of a national organization for seven years, but that responsibility had run its course for me and I had left. My husband Steve began murmuring about retirement. It should have been a time to kick back and relax, right?

But that didn’t feel very good to me. Don’t forget: I was a striver. Sure, people were clamoring to sign me up for some new tasks: new boards to serve on, new groups to join. But none of them really appealed. I had reached a point at which I didn’t want to incorporate anything into my life that didn’t feel right to me.

Intellectually, I knew that it was time to be still and wait. I was in a period of incubation. I waited, and waited. For two years I waited. But no new major “goal” came to me. Smaller interests did appeal to me, though. I took up some sewing. I did an art workshop here and there. I became interested in learning more about climate change, permaculture, sustainability, and what I like to call “Back to Earth” activities. I took up gardening and learned to spin wool and milk a cow. I also made some new interesting friends. But slowly I began to realize that, at this moment in my life, maybe it wasn’t about finding a new goal. Maybe it was about something else — an inner transformation of some kind.

Then, in one meditation, I got the following image. First I was walking up a mountain path. But when I asked where to turn next and what to do, I found myself entering the mountain and going deep within it. And inside I found volcanic energy that enveloped me.

It wasn’t hard to figure out the meaning of this message from my inner Self. In the past, I had always been a “mountain climber” who mapped out the mountain path and sent a map back (usually in the form of a book or article) to those who were interested in following it. Now, however, it was time for me to enter the mountain, to become the mountain. In other words, it was about entering within, not striving without.

A few months later, I received the following phrase in meditation:

To me, it meant that it’s all about one’s state of being, not striving for something.

Sure, I thought. Easy to say, but hard to do!

But in response, I decided to perform an interesting exercise. I took out a sheet of paper and, instead of listing goals I wanted to accomplish, or even things I was interested in, I described my ideal state of being. What would the ideal nature of my personal state or world be like, in a more abstract sense?

This was an easier task for me. My list included things like: relaxed and grounded, healthy, spiritual fulfillment, creative outlets, living in a beautiful setting close to nature, loving relationships with my family, the right balance of alone time and social time, friends I enjoy being with, etc. When I looked at this list, I was surprised and happy to find that I already had nearly everything on it — at least to some extent. And I realized that what I really wanted was a state of being, not the attainment of a goal.

It’s almost a truism these days — money doesn’t buy happiness. But the truth is, no external goal will buy us happiness. Money, fame, power. How many times do we hear about people who have these things in spades, but who actually live in personal misery?

One story that made a strong impression on me many years ago pertained to a famous computer scientist. At the time, I was working in that world, striving hard to be as successful as I could as a computer science researcher. Then a friend told me this anecdote. One of the most famous computer scientists in the world was in Washington, D.C., about to receive a science medal the next day from the President. He called my friend from his hotel room, crying. The medal, he said, was meaningless to him, because he had no love in his life. What a poignant and powerful message.

Modern society bathes us each day with messages to strive, strive, strive. We believe that attaining some goal is the key to our happiness. And indeed, I believe it is in our human nature to feel some level of dissatisfaction and always want more. That is what keeps us growing, searching, exploring, improving. In difficult situations, this urge also helps to keep us alive.

But ultimately, we should also try to remember that it really isn’t the external end-result that we really want. That “goal” is merely a surrogate for an internal state of being that is what we truly desire.

Think about it. What is your desired state of being? I would wager that nearly all of us have pretty much the same one. How much of this state do you already manifest? How often do you reflect, with gratitude, upon the blessings that are already present in your life?

Finally, how can you work within to more fully manifest that state of being? Remember, your state is more dependent on you than on external events. That is what many of the exercises in Active Consciousness — based on the teachings of Gary Sherman — are all about: learning to transform your state of being.

In the end, spending a few minutes in each day on meditation, reflection, and awareness exercises might be more productive than all the striving in the world. That’s because it’s not always about climbing the mountain; it’s about entering within it.