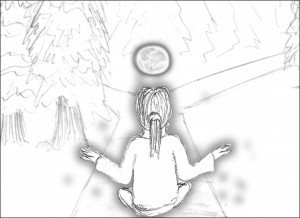 Over the summer, I continued my reading about Hawaiian shamanistic beliefs, and in particular, the work of Max Freedom Long. As discussed in previous articles (October 2012, May 2013, November 2013, May 2014), Long was an American who came to the Hawaiian islands in the early 1900s and made it his life’s work to record and understand the quickly disappearing knowledge of the Hawaiian kahunas. In doing so, he gradually developed a system that he called Huna, which combined the essence of the Hawaiian teachings with his own explorations based on scientific experimentation with psychic and other metaphysical phenomena. This kind of experimentation was popularized in the late 1800s and early 1900s by organizations like the Society for Psychical Research, which is still alive today. I also talk about such research in my book Active Consciousness.

What I enjoy about Long’s Huna teachings is that he was interested in more than just learning about the kahuna beliefs and techniques. He wanted to apply them and see if they actually worked. For Long, the “proof was in the pudding”. Over time, he even developed a worldwide society of explorers who tested out a variety of techniques, Huna Research Associates.

Long was also deeply interested in dissecting the Hawaiian language, especially its spiritual and shamanistic terminology. His goal was to uncover what he felt was a tacit description of the hidden meanings and operational method of the various kahuna techniques, which were largely kept secret by the kahunas. You can learn more about Long’s work by reading his books. The two I have read so far are The Secret Science Behind Miracles and The Secret Science at Work.

What I want to share with you today is a key ingredient that, from the perspective of Huna, seems to be missing from most manifestation techniques being described today — including ones I describe in Active Consciousness. Luckily, however, I have also discovered that most of the ideas in Active Consciousness are amazingly aligned with the secret kahuna knowledge.

As described in my article “The Secret Knowledge of the Kahunas”, each of us is composed of three spiritual selves that also accompany us after death: the Lower or Basic Self (Unihipili), the Middle Self (Uhane), and the Higher Self (Aumakua). The Higher Self is essentially the same as what I call the Higher or Inner Self in Active Consciousness and may correspond to the Causal Body. The Middle Self controls our reasoning mind and may also correspond to the Mental Body. The Lower or Basic Self is the part of us that holds our memories, our emotions, our subconscious beliefs, and controls our physical body, and may correspond to our Etheric and Astral Body. Interestingly, it is the Lower Self that holds most of the power in our exercise of psychic abilities. Perhaps that is why, in order for us to be successful in utilizing these innate psychic powers, the censoring tendencies of the rational Middle Self must largely be subdued.

A key belief held by the kahunas (and the missing ingredient in most manifestation methods) is that in order for the High Self to guide us and aide us in manifestation, a connection must be made from the Lower (Basic) Self to the High Self. This connection takes the form of a cord called the Aka Cord that connects up the Lower (and Middle) Selves to the Higher Self. Moreover, this Aka Cord must be charged with energy or Mana, an energy that probably corresponds to qi or the vital force.

Two key ingredients are required for a successful and strong Aka Cord to be built as part of the prayer process:
1. Mana or energy must be gathered. This is usually relatively easy, and typically involves some breathing and/or visualization exercises.
2. The Basic or Lower Self must be willing to create the Aka cord and communicate the desired prayer along it.

It is this latter ingredient that is often harder to achieve. Since the feelings and beliefs of the Basic Self are often subconscious to us, we may not be consciously aware that they are blocking us from building a strong connection to the High Self. Typical obstacles include: feelings of unworthiness, possibly based on guilt; stubborn resistance, skepticism, fear, or even laziness; a subconscious desire not to fulfill the prayer — for instance, not truly wishing to recover from a disease because of the consequent loss of dependency; harbored hatreds and ill-feelings toward others.

A large part of kahuna teaching involves techniques for removing these obstacles. For example, if a person feels guilty for something they have done, they must enter into a process of reconciliation or atonement of some kind before engaging in manifestation prayers. Indeed, one of the reasons that I emphasized the meditations and self explorations in the latter half of Active Consciousness was that one would become more successful in manifestation. Ultimately, however, the most important reason for developing one’s consciousness is not to attain a specific goal but rather, to develop as a human being. That, too, is the real focus and power of the kahuna lore.

I encourage all of you to contemplate these truths in your explorations. And remember to gather some Mana or energy first when you seek guidance and help from your Inner Self. One simple exercise is to breathe in to a count of four, hold your breath for four counts, breathe out for four counts, and remain empty for four counts. Perform this cycle four times, while holding the desire to gather Mana in your awareness. You may be surprised by the results!