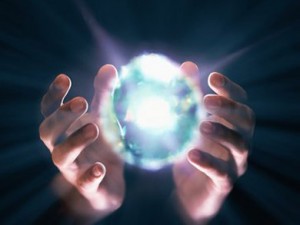 My New Year’s suggestion to you is to begin by watching this broadcast by Barbara Marx Hubbard on the occasion of her 85th birthday.

Hubbard is a futurist and visionary for the future of mankind and I plan to learn more about her work in 2015. In her broadcast, she describes an out-of-body experience she had in the early 1960’s that showed her a future in which humanity, having experienced severe global world-wide difficulties, collectively rises to a new level of awareness and transcendence — a shift that even repairs the physical Earth itself. As Hubbard says, back when she had this experience, she could not have foreseen our current times over 50 years later and the many technological and political developments that have occurred. Some of these developments, like increased industrialization, overpopulation, GMOs, and pesticides, have come to plague the Earth, while others, such as the internet and social media, now provide hope for humanity coming together. As the years have gone by, she has seen more and more of her vision develop and come true.

After I watched Barbara’s broadcast, my husband Steve and I both viewed her short film “Our Story”, which you too can view for free by signing up for her newsletter. After watching it, I was amazed by how much of what Barbara was saying echoed themes in my book Active Consciousness. However, Steve’s reaction was: “That’s nice, but what does it mean? What is she saying we should do?”

A good question. But I quickly realized the answer: We must first hold and then work toward a positive vision of humanity’s future.

On the surface, this may sound pollyanna-ish. But if you think about it, this is exactly what Active Consciousness is all about. The first step in creating the future we want is having a vision of it. If we focus on it, hold it as “PURE GOAL”, we can eventually be led to it.

But if we get diverted by and trapped in the negativity and fear that is ever-present in the media around us, we not only lose our vision and become despondent, but we help to reinforce and even create a more negative future.

So it’s not about pollyanna-ish hopefulness nor denying reality, it’s about holding, holding, holding onto the vision, with trust, with confidence, with conviction, and then using that vision to guide our actions. It’s not easy! It’s hard work! We may not even see the fruition of our labors in our own lifetimes. But it’s the only way forward to the future we want.

One of the divination tools I use on a regular basis are the Medicine Cards developed by Jamie Sams and David Carson. The card I had pulled for December 2014 was a challenging one — Raven (symbolizing magic) in the contrary position. Ouch! And indeed it was a difficult month, filled with serious illness in my extended family, extremely time-consuming and difficult communications on a committee I am co-chairing, and frustratingly slow progress on a few other issues in my life. As Carson and Sams write, “Contrary Raven may be bringing you a warning that you are not equipped to move into another level of consciousness until you have mastered the one you are currently working with… Contrary Raven may also portend a time of smoky, confused messages that you cannot see or hear because your ‘intellect’ is insisting that magic is not real… Raven may be pecking at the door to your consciousness, but you will not receive unless you clear the smoke and seek the other realms of imagination and awareness where magic lives.”

I will tell you this: I may not have handled my challenging December as well as I could have, but I have learned a great deal. And I am feeling much more optimistic about 2015 than I was about 2014.

I suspect that the world has been experiencing Contrary Raven too. We are surrounded with difficulties and frustrations. We feel Raven peck, peck, pecking at our world. And at the same time, something new does seem to be emerging. Humanity is seeing truths we have not seen before. The smoke is beginning to clear. We may not be there yet, maybe not even close, but I believe the future we want will be created if we see the vision and hold fast to it. That’s what Active Consciousness is all about, and that’s what visionaries like Barbara Marx Hubbard help us to do.

Dear readers, here’s to much brighter 2015, with humanity finally turning toward a brighter collective vision of our future — slowly but surely! Hold, hold, hold onto the vision, and let it guide you each day as you CHOOSE JOY.