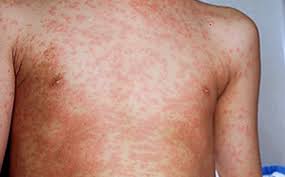 When contemplating what to write about this month, I couldn’t help being led back, over and over again, to the measles. The discussion about the measles vaccine is all over the media, and just when it seems to let up, there it is again.

Of course, whether or not any parent elects to have their child take the MMR vaccine (for measles, mumps, and rubella) should be their choice. To force vaccines on people is a violation of their fundamental freedom over their bodies. In fact, the right to choose whether or not to vaccinate is part of the constitution of some countries, like Canada. Think about the implications of forcing everyone to inject something into their bodies. Today it’s vaccines. Tomorrow, what next? Already, our health freedom rights are being eroded further and further. California, once a leader in providing both philosophical and religious exemptions to vaccination, is in danger of losing both, with weakening of exemption rights already having been recently enacted.

In any case, I’m growing weary of the complete lies being promulgated by the media about the measles vaccine. So let’s focus on some facts that anyone can research for themselves.

Measles is, in general,  a benign childhood disease in the Western world. All the scare tactics about the dangers of measles in the West are completely overblown. Measles may have caused many deaths in countries with poor sanitation and food supplies, but in the West, it is generally completely benign in children. I am 59 years old. I, and nearly everyone else of my generation, had the measles (as well as chicken pox, mumps, and rubella — also known as German measles). In the years prior to introduction of the vaccine, measles-related deaths (including adults, who are more endangered by measles) had gone down to less than 1:1000. Compare that to the current autism rate of 1:68 (and going higher each year), not to mention the much higher rates of other autoimmune diseases, which many believe are also attributable to over-vaccination.

The measles vaccine does not guarantee immunity. However, getting and recovering from measles does provide complete immunity. As we have been finding, a great number of the people who get the measles in minor epidemics (which have always popped up periodically, not just now, with the “Disneyland” epidemic scare) have been “fully vaccinated.” This is what should give people pause. In fact, I recently had some correspondence with a vaccine expert who has consulted for the CDC. As she writes:

“I do think that getting measles vaccine probably decreases the likelihood of getting measles. But, it’s not 100% effective and over time, it has become less effective, partly due to changes in the virus and waning immunity. It is possible to be fully vaccinated and after a couple years have little/no measles antibodies… The first couple of decades that the measles vaccine was out and routinely administered, children were born to mothers who’d most likely had measles and passed on naturally-acquired maternal antibodies. Not true any more. The maternal measles antibodies passed on by mothers who have only been vaccinated are of very poor quality. I think the perceived beneficial effect of measles vaccination was partly bolstered by strong natural maternal antibodies. We will see a lot more ‘vaccine failures’ for many different reasons. It will be hard to sort out because it’s not easy to define ‘unvaccinated / undervaccinated’ and vaccine efficacy is a moving target.”

Complications from measles are much more common in adults than in children. By creating two generations of people who have been vaccinated to prevent the childhood diseases rather than experiencing them, we are also creating generations who are more likely to suffer from measles complications (as well as complications from chicken pox and mumps) as adults. Indeed, rather than blaming unvaccinated US citizens for childhood-disease epidemics, let us remember that visitors from many countries enter the US every day, visiting places like Disneyland! Are we going to set up vaccine police at our borders? By relying upon artificial vaccines rather than the complete immunity that nature designed for us — via the natural occurrence of the childhood diseases — we are creating the potential for much worse consequences when these diseases affect adults. It is just like the mistake we, as a society, have made with the over-use of antibiotics and the subsequent problem of antibiotic resistance. Is it too late to turn the tide and let children experience the childhood diseases again, before it’s too late? Perhaps, at least, their grandparents can care for them, knowing that they have complete immunity.

The 1998 Lancet paper authored by Andrew Wakefield and co-authors about the relationship between the measles vaccine and gut inflammation in autistic children has NOT truly been discredited. First of all, Wakefield’s co-author on the paper has been completely exonerated by a British court. As this article states, “A judge has now ruled that the GMC hearings were a farce. Parents are waiting for journalists to find their spine and start some honest reporting on the character assassination of doctors that is blocking medical treatments for vaccine injured children, and the role that GSK and Merck may be playing to protect their profits on the MMR vaccine.”

Secondly, the proceedings against this paper focused on minutia of the ethics of the study’s procedures and whether necessary permissions had been obtained, not on the general result of the study itself (i.e. the result found about the link between MMR and bowel disease).  Indeed, none of the parents complained about the procedures that were used, and stood behind Dr. Wakefield and his co-authors.

Of course, there are many other subsequent studies that do link vaccines to autism, and MMR to bowel disease too.  These studies are always ignored by the press, which continues with its mantra about the Wakefield study.

Finally, let’s not forget that homeopathy can be an effective treatment for measles! It can also be used prophylactically if there is an imminent threat of infection. There are actually many remedies that can be helpful for measles, and as usual, the patient must be analyzed as an individual for most effective treatment. Some of the major remedies for measles include: Pulsatilla, Sulphur, Aconite, Apis, Bryonia, Morbillinum (the measles nosode), Belladonna, Kali Bichromicum, Gelsemium, and Euphrasia. This article by Dana Ullman might be helpful.