↓
Home→Homeopathy→Preparing for Summer Fun — For Kids and Ourselves 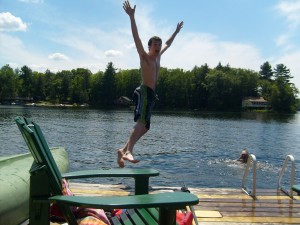 That’s a picture of my older son Izaak having some fun on the water in Canada. When he was a kid, I used to send him and my younger son Max off to a summer camp nearby, armed with their homeopathic remedy kit. Truth be told, I also had to tell them to keep it a secret. The camp “powers that be” would not understand why I wanted them to always try homeopathy first. Whenever a remedy was needed, they would hide in a bathroom to take a dose.

As it turns out, both my boys spent a month at camp for many years and never once needed a trip to the infirmary. In contrast, all the other kids seemed to live there, often visiting every day for their allergy shots and a variety of other meds. Izaak likes to tell the story about the last week of his last year at camp, when he told his friend that he had never once gone to the infirmary. His friend’s mouth hung open!

One important resource, especially when adults travel, is a homeopathic travel book. I recommend one authored by my friend, Richard Pitt — The Natural Medicine Guide for Travel and Home. Or try:
The Savvy Traveler’s Guide to Homeopathy and Natural Medicine by the Reichenberg-Ullman’s.

I recommend building a kit with the following remedies in 30c potency. You can buy travel kits from a variety of homeopathic pharmacies too. See the Impossible Cure resources page for links. Many kits come with a useful advice booklet about treating common ailments, which can be invaluable. Most homeopathic pharmacies also sell creams. Another option is the line of creams created and sold by my own homeopath, Deborah Olenev.

Useful Remedies to Include:

Start with a single dose. If nothing at all changes within an hour or two, try another. If nothing changes then, you have the wrong remedy.

Remember: If you get improvement, do not automatically redose. Only redose if you find yourself going downhill again. In other words, only dose as needed.

If redosing is needed, it can be useful to create a water bottle with a few pellets of the remedy in it. For a re-dose, shake vigorously and take a mouthful, swish and hold in the mouth for a few seconds, then swallow.

Remember that an aggravation can be a positive sign and will be followed by improvement. Do not panic, be patient. However, if all new severe symptoms appear and you are getting worse, you probably have the wrong remedy.

In travel situations when you don’t have a knowledgeable homeopath with you, you often must resort to “specifics” — remedies that are commonly associated with a particular symptom. This approach will often get you through.

Finally, it goes without saying, don’t be afraid to resort to allopathy when it’s really needed.

The following is a set of quick advice for common problems.

WOUND TIP: Remember hydrogen peroxide! After washing, apply it to wounds, spider bites, etc. It is also useful as a gargle (don’t swallow!) for sore throats.

Healing wounds: Calendula cream, ointment, or gel. I find that the gel often seals things up the fastest. Make sure the wound is clean.

Joint Injury: Ruta (ligaments, tendons), Rhus-tox (sprains and strains, better from continued movement), Arnica. Creams can be useful too — e.g., I use this “arthritis cream”, which contains all three ingredients.

General illness: Start with a dose of your constitutional remedy. This can often be sufficient to bump you out of whatever is ailing you and you won’t have to resort to any other remedy.