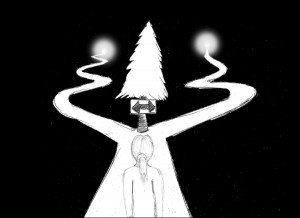 Do you know that feeling, just before you reach the initial peak of a roller coaster? You feel a mixture of excitement, dread, anticipation, and an odd quiet stillness, as if you are suspended in mid-air? That’s how I am feeling at the beginning of 2016. It’s like something big is coming, but at this moment, everything seems still, everything seems status-quo. I feel like our civilization is on the verge.

You may have noticed that I’ve occasionally skipped a month in the release of my Active Consciousness newsletters. That’s because I’ve been actively engaged in trying to practice what I preach, release myself from “shoulds”, and follow my guidance. I’ve also been trying to release myself from the neverending weight of achieving and instead, be okay with just being. Maybe it’s related to the fact that I just turned 60. I’ve also decided to put my plans for a third book on hold for now. I wrote a few chapters, but I just wasn’t “feeling it.” As a result, my life has become more empty, still, and quiet, mixed with a feeling of waiting.

Which brings me back to the verge. As the drawing above indicates, our current verge might also be a choice point. This concept (as well as the image) is from my book Active Consciousness. A choice point is a point at which the future bifurcates in a fundamental and non-mechanistic way. It is a point where our intention sends us down one path or another. Thus, not only may our collective roller coaster be nearing a peak, but there might be more than one track that we could take on our way down.

Surely, many major choices are coming down the pike this year. For one, there is the American election of 2016. Talk about choices! Could there be two candidates any more different in their views than Donald Trump and Bernie Sanders? Our world is definitely caught in a period of immense polarities in almost every sphere of life. This too is part of being “on the verge.”

(By the way, as I discuss in my first book Impossible Cure, this is also related to how homeopathic remedies work. The very subtle action of these remedies can create sweeping healing effects, but only if they are well-chosen and matched to the patient. Although they may be miniscule in materiality, because they exert just the right influence at the right time, they are able to create huge healing effects.)

Lately, I have become very interested in and inspired by the work of Buckminster Fuller. Bucky (as he liked to be called) often used the phrase “Trimtab” to describe himself. In fact, he had the phrase “Call Me Trimtab” inscribed on his tombstone!

A trim tab is a small flap or rudder that is placed on the much bigger rudder of an ocean liner or airplane. Instead of exerting a large force to move the main rudder, a very small change is made to the trim tab. Because of the effects of wind or water pressure and speed, this small change to the trim tab is able to move the large rudder, and as a consequence, the huge vehicle to which it is attached. Thus, the idea of trying to be a trim tab is that a small action can be selected and performed in just the right way so that it can have huge effects. A related idea is the use of minimal energy and material to have maximum positive effect — an important principle of sustainability.

Bucky Fuller devoted his life as an experiment to prove that one small man could have a huge positive impact on society — bigger, in fact, than could be achieved by any weighty organization or government. In other words, he tried to be a trim tab. And many would agree that he succeeded!

As we near the peak of the roller coaster of 2016, I think it behooves us to all to try and be trim tabs so that we can collectively help to steer the course of our descent. Don’t forget: even the smallest action can be a trim tab. It could be a smile or greeting to a stranger; it could be a connection you make between two people; it could be this article that I send out to you and that you share with your friends!

And one way to figure out what would be the most optimal trim-tab-like thing to do is (in the words I use in Active Consciousness) to “Choose Joy.” Remember to take that extra moment to reach deep within and follow your heart, your Inner Wisdom. We’re all in it together, all interconnected, all aboard the wild roller coaster of 2016. Let’s have a great ride!