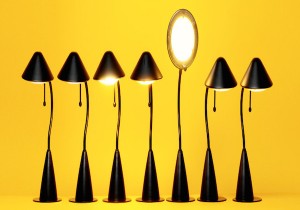 April is Autism Awareness month, so what better time than now to talk about the subject of awareness in general and the ever increasing incidence of autism in particular?

I’ve been planning to write this article for several years. Ten years ago, I began collecting data about the incidence of autism and projecting its growth, which I estimated to be approximately 10% a year. I’m sad to report that the CDC statistics have borne this rate out, though it may actually be even worse. I distinctly remember when the rate of autism was 1 in 150 children, and it wasn’t that long ago — at about the time my book Impossible Cure came out in 2003. Now the media commonly cites a 1 in 68 statistic, though a more recent, less publicized 2015 CDC report cites a new rate of 1 in 45 children. We have broken the threshold of 2% of children with autism. 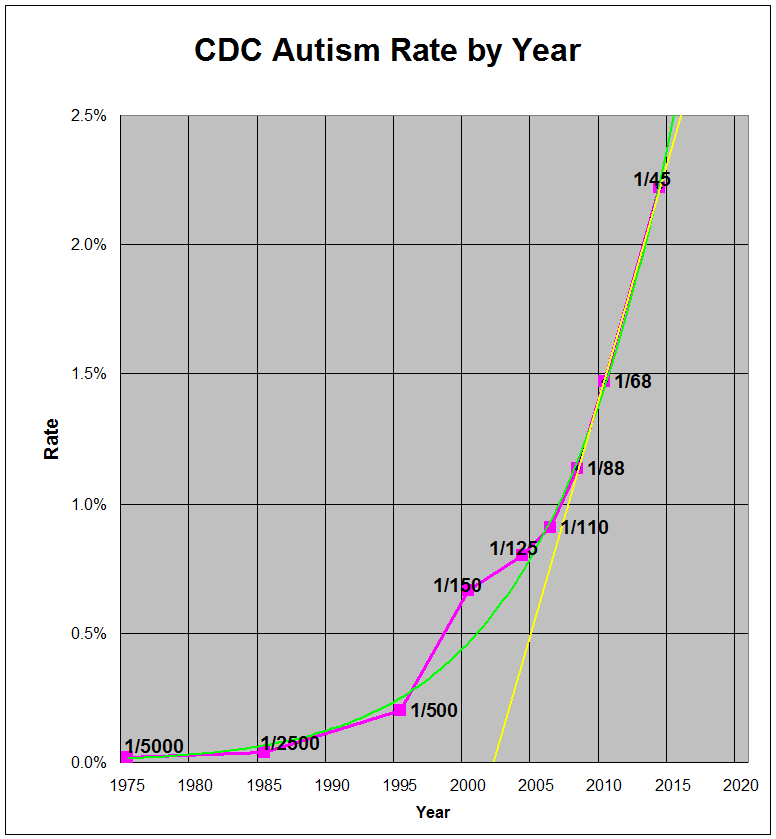 Where is this all taking us? At what point will the media stop saying that the increase in autism is nothing to be alarmed about — that it is illusory and simply due to an increased awareness of the condition and improved diagnosis? At what point will the media stop implying that autism is a genetic disease that has nothing to do with environmental causes? (Although genetics may make some people more susceptible to these causes, as environmental factors increase in intensity, more and more people are clearly falling prey to them.) Consider this. What will our society be like when 1 in 10 children (10%) are autistic? 1 in 5 children? Half of all children? Don’t forget: autistic children grow up and become autistic adults who will be dependent on society for help. We are only now beginning to experience the consequences of an increased adult autistic population, as the “statistics” of the 1990s enter their 20s.

These are all interesting questions, and my guess is, we will all be finding out the answers in our lifetimes.

But this article isn’t just about autism. The issues, questions, and potential solutions to the autism epidemic also pertain to other alarming trends humanity is facing. Climate change is the most obvious example. The growing corruption of our food supply and other types of environmental damage wreaked by GMOs, pesticides, and monoculture practices is another. We humans are certainly a highly adaptable species that is able to survive in the face of environmental challenges that are obvious to us. But we seem to be quite bad at noticing and responding to environmental problems that develop more slowly or that don’t affect us directly. Like the proverbial frog not noticing that the pot is coming to a slow boil — or even if it does notice, it is too fearful, numbed out, or self-absorbed to do anything about it — we humans tend to ignore evidence until it’s too late to escape severe consequences.

This article is the first in a series of two or three articles that will talk about this human trait and the kinds of things that might influence the rate at which we take appropriate action. One question I’d like to explore is whether cultivating a particular form of awareness could be a remedy. Another important factor may be whether we can find attractive alternatives that provide a solution.

Whatever the problem may be, however, perhaps our biggest obstacles to taking early action are the all-too-human forces of fear and greed. Indeed, one thing we can be sure of: we would take appropriate action if it could also be motivated by fear and greed! Unfortunately, fear and greed often lead to inappropriate action instead. Wouldn’t it be better if an enhanced form of awareness and access to alternatives could be used to motivate us?

So let’s begin by taking a deeper look at the autism epidemic.

When will action happen?

Right now, the only people shouting and screaming about autism are the families that have autistic children. I believe that the latest point at which meaningful action will begin to take place in the USA is when more than 50% of families are in this boat. Assuming that a family will become active when a grandparent has an autistic grandchild, and assuming a birth rate of 2 children per couple, this point will be reached when the autism rate is 12.5% (1 in 8 children). Now comes the even scarier graph. 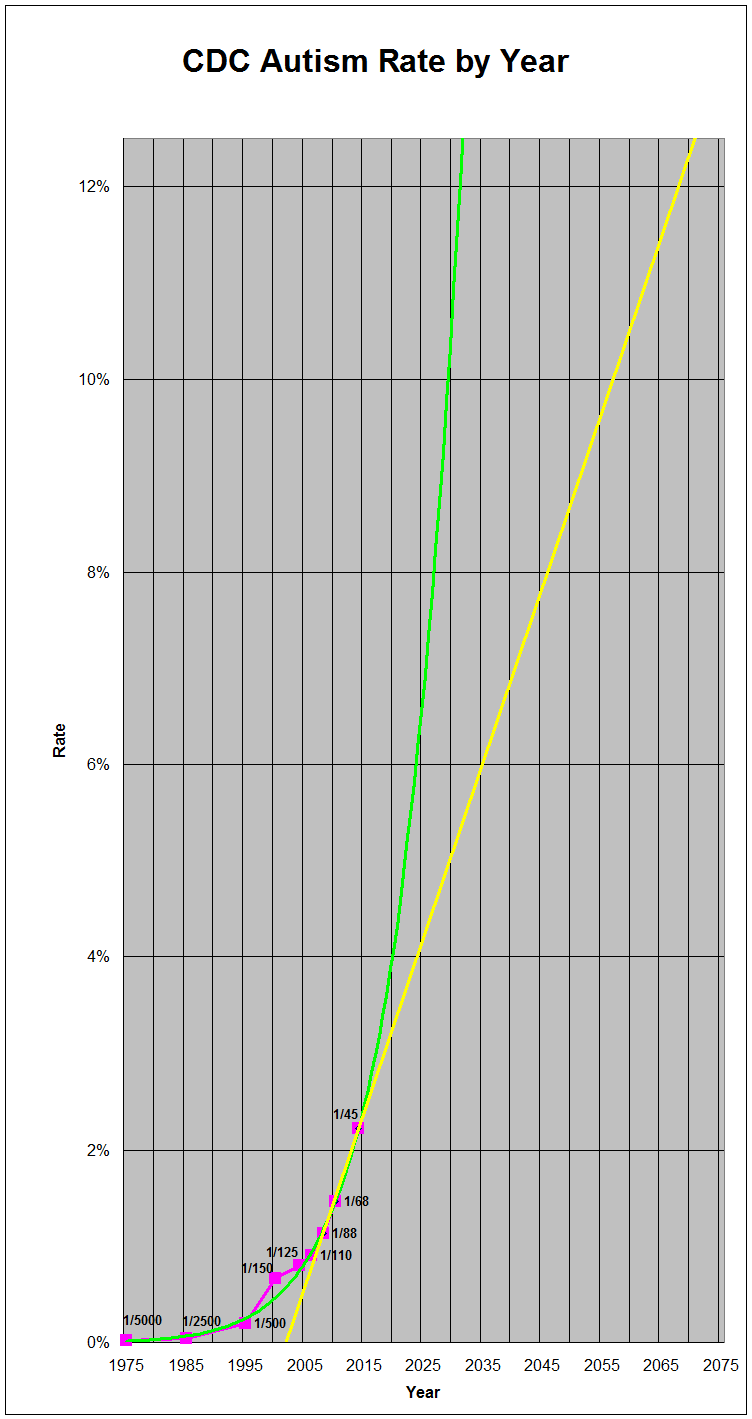 A more alarming trend line is the green curve, which more accurately fits all the existing CDC data. This would put us at a rate of 10% (1 in 10 children) in 2030 (less than 15 years from now), and 12.5% (1 in 8 children) just 2 or 3 years after that. If the exponential curve is correct, then the next 20 years will see the autism issue slowly becoming personal to most Americans.

What are the causes of the autism epidemic?

So how can we begin taking action earlier than 20-50 years from now? I think that depends on a variety of factors, all of which pertain to the underlying causes of autism. Looking back at the first graph, we can see that the rate of autism really started going up in the late 1980s and 1990s. Our answer to the autism puzzle will come from looking at environmental factors that began to accelerate at that time (clearly, it’s not changes to our genetics!).

Personally, I believe that autism is the end result of several factors that, together, create a perfect storm that weakens and twists the immune systems of our children, creating a tidal wave of autoimmunity and systemic poisoning (especially of the brain and gut). The more and more these environmental factors increase, the greater the number of children who cannot defend themselves and thus fall prey to autism and a host of other disabilities and weaknesses that are increasing at an alarming rate. Three of the most obvious factors that meet our criteria are the following:

1) The ever increasing vaccine schedule, which overstimulates the immune system and causes toxic metals such as mercury and aluminum to be injected directly into the blood stream. Consider this. During my own childhood in the late 1950s, children were given 7 doses of vaccine antigens. In 1983, the total number of doses given to children (ages 1–18) was 11. Today children are subjected to 69 doses of vaccine antigens.

Interestingly, this alarming increase in the vaccine schedule began in 1986 (also the time at which the autism rate really began taking off!), when the vaccine manufacturers and doctors were indemnified from any legal consequences due to vaccine injuries.

Since that time, the drug companies have been developing more and more vaccines to sell us. There are hundreds more in the development pipeline, with the media and government well-funded by the pharmaceutical industry to promote them, usually by instilling panic about disease and urging public mockery of those who don’t comply. They have created the perfect storm of fear and greed!

2) The worsening of our food supply, and in particular, the growing prevalence of GMO and other foods bathed in glyphosate — Monsanto’s “Roundup.” Please note: the genetic modification of foods like corn, which are increasingly a part of every bite we take, was done primarily to boost sales of glyphosate. Greed at work!

3) The increasing amount of electromagnetic radiation (EMFs) all around us, due to cell phones, WIFI, cordless phones, smart meters, and other “smart” home devices, some of which are now wearable on our bodies. There is even talk of having such devices implanted inside our bodies.

Whether or not these three particular things are key factors in creating the autism epidemic could easily be discovered if we examined the rate of autism in populations that do not partake in vaccines, eat only organic foods, and are not highly exposed to EMFs. There are even such populations here in the USA. For example, many have cited the low incidence of autism among the Amish. Unfortunately, no formal study has ever been done to make this kind of comparison — and probably for good reason. The financial powers behind all of these environmental factors — vaccines, “conventional” food, and high tech — do not want us to think too deeply about these things. But the time is coming. When your child or grandchild has autism, you will want to know!

So what can be done?

I think it is highly unlikely that we’re going to see a slowdown in EMF-generating technology, though it could possibly be made safer through technological fixes or more circumspection about keeping such devices near or inside our bodies. There is a growing awareness of the dangers of cellphones and WIFI in European countries (who are often way ahead of us in the awareness game). They are even beginning to take action, at least with respect to children’s exposure.

Awareness is also growing of the dangers of glyphosate and GMOs. Once again, Europe is ahead of us. And with food, at least, we do have an attractive alternative — organic food and a return to regenerative farming practices. The big food companies are fighting GMO labeling with all their might, but they only have greed on their side, not fear — so labeling in the USA is probably just around the corner. (Note: Canada and the US are two of the few countries that don’t already do so.) Once parents can better control their children’s food intake, it will be interesting to see if it has any slowing effect on the autism rate. And it will certainly be interesting to see if the improved food supply and reduction in child exposure to EMFs in Europe results in a lowering of the autism rate there.

The hardest nut to crack, and in my view the biggest factor, is vaccines. The media and politicians are bought and sold on this one (unfortunately, even the most liberal ones), so awareness has only been able to creep in through the back door of the internet and the activism of autism families. But there must be desperation afoot in the pharmaceutical industry, because they are vigorously creating and pushing forced vaccination mandates all over the country. (Just look at the legislators who are proposing these mandates; they will invariably be the ones who are most highly funded and advised by Big Pharma.) The vaccine manufacturers may simply see the writing on the wall, and so are trying to make as much money on the vaccine cash cow while they can. Unfortunately, they may be hastening their own demise by accelerating the increase in autism, as more and more vaccines are added to the mandated schedule. This too will be interesting to see.

So let me conclude here. I hope that I have at least given you food for thought. In my next installment, I will consider more deeply why it is so hard to wake people up into awareness and especially into action about the autism epidemic and other alarming trends.