As we all sit in our respective post-election worlds,  perhaps it’s a good time to focus on something real and substantial that could fundamentally change our world for the better. Just as digging into the earth and planting seeds can help us feel grounded and hopeful,  working toward something that could improve humanity’s perception of and connection to the Earth and its global civilization might also serve to be grounding and fill us with a new sense of invigoration and hopefulness.

Somewhat forgotten in today’s world, but never forgotten in the annals history, is the groundbreaking and mind-blowing work of R. Buckminster Fuller (1895-1983).  Although he is most well known for his invention of the geodesic dome, Bucky (as he liked to be called) was so much more than a visionary architect and inventor.

Explaining the scope of Buckminster Fuller’s work in a short article is impossible, but let me try, as briefly as I can, to get across the flavor of the man and the potential of one of his as-yet-unrealized but long-sought-after dreams: the Geoscope.

Buckminster Fuller was the epitome of the home-grown genius and free thinker.  Groomed for the Ivy League, he was quickly ejected from that world due to his nonconformist thinking. Bucky always started from first-principles and relied on his own intuition. The very core of his being rejected conformism to “accepted wisdom”. In his designs, he liked to use the natural world as a model and inspiration, reasoning (correctly) that nature always chooses the most efficient path.

Bucky was also a futurist, and tenaciously studied the long-arc of human society and planetary evolution in order to understand the possible futures that lay before us.  His response to this research was to direct his own work toward what he called “anticipatory design” — to create, 50 years before they would be needed, sustainably producible physical objects that could serve the greatest number of people with the least use of energy and material. He strongly believed that it was futile to change anyone’s mind about anything. However, if one created an object that was obviously the best tool for a given purpose, people would naturally adopt it. Thus, in order to effect positive change for humanity, Bucky felt that the best path was to alter the human environment in some way that led to that change.  Think about the world-transforming effect of the internet or of the iPhone and you get the idea.

The most well-known anticipatory-design artifact that Bucky invented was the geodesic dome. Its amazing ability to house humanity (it uses the least amount of material to create the largest volume of space, naturally creates a healthy atmospheric habitat inside, and can be scaled up to city-size) has not even been tapped yet — but it likely will be in the future. There are dozens of other Fuller creations as well.

Of course, Bucky was subject to the conformist pressures of his world, just as anyone else is.  Don’t forget, he was born in 1895. He attempted several times in his life to “earn a living” for his family, but these efforts were repeatedly unsuccessful. In his early 30s, after his first child died and his wife and new infant daughter obviously needed care and support, the architecture and construction company he had founded went belly-up.  On the verge of committing suicide, Bucky experienced a spiritual emergency and received enlightenment from a higher source. He decided to conduct the rest of his life as an experiment, calling himself “Guinea Pig B”.

From that point on, Buckminster Fuller dedicated his life, not to helping himself and his family, but to helping the most of humanity he could.  He refused to work for any corporate entity or organization (with the exception of the Navy during WW II).  Bucky wanted to see what one small average man could accomplish on his own, that no government, corporation, or large organization could achieve. He reasoned that “Universe” would naturally support activities that most fostered its own positive evolution.  And when he dedicated all his efforts according to these principles (instead of to “making money”), he met with success. Over time, his brilliant ideas and influence extended throughout the world. He had particularly tremendous influence on a global level after WW II. By the late 60s and 70s, Bucky had even become a kind of Yoda-like guru to the student movements of that period.

All over the world and over many centuries, one of the objects that most captures the human imagination is the globe.  Globes sit in living rooms and in children’s bedrooms, serving as vehicles for outward expansiveness and inner hope and imagination.

Fuller envisioned just this kind of thing, back in the 1950s, and he called it the Geoscope. Bucky knew that humans could not easily perceive global trends over time. His conception of the Geoscope was as a tool that would enhance our perception, providing a literal “scope” (like a telescope or microscope) to see and understand what Bucky called Spaceship Earth (Geo).  He believed that if we could see this information, especially collectively, we would also begin to see and understand patterns that could help humanity.

When Bucky first conceived of this idea, he imagined it as a huge exhibit for a World’s Fair.  A huge geodesic sphere would be suspended in a stadium, covered with an accurate image of the Earth.  Then, slowly, the tessellated sphere would open, creating a flat rendering of the Earth that would descend to the floor.  This unique Earth projection was also a Buckminster Fuller invention, called the Dymaxion Map.  Unlike other projections, it preserves the relative sizes of the land masses and also fosters an awareness of the interconnection between them. On this map, various forms of animated data would be depicted for all to view. 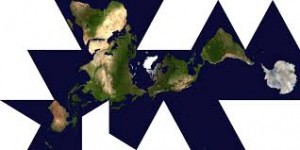 Although this vision was never implemented, Bucky kept promoting the idea of the Geoscope for over 30 years. One of the most well-known implementations he lobbied for was a giant 200-foot diameter geodesic sphere suspended over New York’s East River, in view of the UN building and covered with lights. He envisioned the UN officials looking at this depiction of the Earth and the various data animated by the lights upon it, who then would make more informed decisions that would help the world. He also imagined viewing platforms within the Geoscope.  From this perspective, people could accurately view the outer universe of stars and galaxies from different points of view on Earth.

Although a few small-scale Geoscopes were built, none accomplished anything like Bucky’s vision. The technology was simply not there yet — but it is now. Once again, Bucky may have been envisioning something 50 years in the future. And that future is now.

Imagine this. What if we combined something like Google Earth with VR technology, advanced data visualization techniques, and modern media?  Put on your VR goggles and see the Earth in all its glory — close up or from far away. Spin it. Project it as a Dymaxion Map. Ask for any form data to be presented to you, over any period of time, at any place on Earth.  Speed it up.  Slow it down. Correlate it with other data.  Ask for hidden correlations to be revealed to you. You might even run simulations or projections of the future (which Bucky called “playing the world game”). This technological framework would comprise the Geoscope itself.

Next, put the Geoscope out there for everyone to play with. Artists, scientists, movie-makers, any kid in his or her bedroom, could make content using Geoscope data.

Now ask yourself: How would it change humanity if we could accurately perceive what is really going on and communicate to each other about it? How would our consciousness change? What would we do?  The mere image of the Earth from the perspective of the Moon changed the consciousness of everyone on the planet.  How much more so might the Geoscope change us?

I’ve been thinking about this a lot lately. Indeed, Bucky’s goals with the Geoscope coincide with many of my own in writing Active Consciousness. Just as meditation can allow each of us to enter a “witness” state and see ourselves and our stories for what they are, perhaps the Geoscope will enable humanity to enter into a state of global mass meditation in which we really witness ourselves as a whole.  The resulting shift in consciousness would be magnificent!

After having spent some time familiarizing myself with his life and work, I believe that Buckminster Fuller was a truly enlightened visionary who would not have spent decades promoting an empty idea.  Bucky knew the Geoscope was important to humanity.  And the time is now to build it. If you are inspired by this article, please share it, talk about it, write to me, or help make it happen in some way. Let’s take this moment in history, get grounded, and plant a seed that could really grow into something wonderful!

Want to Learn More About Bucky?

Here are some places to start: