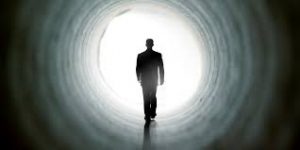 With Halloween and the Day of the Dead upon us, it seems like a good time to discuss the topic of death. What really happens when our physical body dies?

While modern science and medicine is convinced that our physical bodies are all there is to us, every ancient culture and wisdom on Earth disagrees. When we die, they say, only our physical body dies. Afterward, another part of us moves on or transitions into another realm of being.

While hard-headed materialists say that belief in an afterlife is all wishful thinking, I tend to side with the wisdom of the ages. In my view, what’s the harm in doing so? Of course, one doesn’t want to waste one’s life on Earth focusing on or being manipulated by others, in the hopes of a better afterlife. But if nothing truly exists after death, what’s the harm in believing there might be? And if something does exist after death — well, believing otherwise seems an awful lot like spending your life feeling empty, scared, and depressed about something that never was true in the first place.

Actually, there is quite a lot of evidence for the afterlife, and I have a few personal experiences of it. Take, for example, the work of psychiatrist Dr. Ian Stevenson about reincarnation. He found many children who had memories of their previous lives — including obscure details that were later verified. There are even online videos and movies made about stories like this. (Just type in “child with memory of afterlife” to YouTube.)

Then there’s mediumship — the art of communicating with the dead. For a while, my husband Steve and I occasionally visited spiritualist churches, including a trip to the spiritualist town of Lilydale, New York. Spiritualism is a religious belief system whose goal is connection to the unseen realm of the afterlife. Adherents train themselves in the art of mediumship, as well as other psychic abilities. I believe there is a lot to be said for visiting a medium, even if the bulk of contact information is bogus. For example, contact with a recently-passed loved one can do an awful lot to lift debilitating grief; I myself had the experience of this.

Here is a description of one contact with the dead that was particularly convincing and noteworthy to Steve and me. While still in our car in the parking lot of a spiritualist church, I focused on the intention to contact my father who died in 1971 at the age of 72. Although I said nothing to anyone except Steve about this intention, the medium came to me during the service and told me he was receiving contact with an older man. The medium kept telling me he was being shown the image of a baby falling out of a carriage. I told him that this did not ring a bell for me, so the medium moved on to someone else. But later, Steve told me that this had actually happened!

Steve had forgotten all about it, but about 20 years earlier when our son Izaak was a baby, Steve was pushing him in a stroller but had forgotten to fasten the seat belt. When the stroller hit a bump in the sidewalk, Izaak fell hard, face-first onto the pavement. The odd thing was, Izaak didn’t cry at all and was unhurt, despite quite a bad fall. Steve was shocked at the time; he was sure Izaak was going to have some kind of injury. In fact, he didn’t tell me about the accident because he thought I’d be angry with him! When Steve and I told the medium after the service about this occurrence, he said that sometimes the dead tell us information like this to let us know that they had intervened to prevent an injury.

Now, had this medium really made contact my father? Or was he just psychic and “reading” a long-forgotten event from Steve’s mind? In either case, it’s rather amazing!

As I discuss in detail in my book Active Consciousness, spiritual teacher Rudolf Steiner taught the following about the death process. First, our physical body dies. Then, over the course of the next few days (Buddhists say three days), the energy or etheric body dissipates. The etheric body is likely related to the electromagnetic field and is the fundamental lattice upon which the physical body is built. It is also the primary realm of operation of energy medicines, like acupuncture and homeopathy.

After the physical body dies and the etheric body dissipates, the higher level energy bodies — the emotional astral body, the mental body, and the causal body — continue on. As I discuss in Active Consciousness, I believe that these higher (or deeper) parts of ourselves likely operate in higher dimensional space. They are also part of us when we are alive (even if we are not conscious of them), and give us access to things like psychic abilities and sudden inspirations. I also think that these three bodies correspond to the “Basic Self” (astral body), “Middle Self” (mental body), and “Higher Self” (causal body) of Huna, a spiritual system based on Hawaiian shamanistic beliefs, which I have written about quite frequently in past newsletters.

Although we now only exist as an astral/mental/causal being, we are still essentially “ourselves”. Although we don’t have a physical body living in three-dimensional space, we can create worlds that seem much like the one we departed. As I discuss in Active Consciousness, this isn’t suprising if we are actually operating in four-dimensional space. This realm of being is essentially like the one we sense in our dreams. In fact, Steiner said that our three higher bodies detach from our physical body during sleep or out-of-body experiences. Our primary memories of such experiences are largely those of our astral body.

A very detailed cosmology based on this kind of belief system is described in the work of Waldo Vieira and is taught by the International Academy of Consciousness. I took a couple of weekend workshops with this organization a few years ago and found it fascinating. One of their main focuses is on teaching people to have out-of-body experiences. The organization is based in Brazil, where beliefs of this type are much more common. In fact, a Brazilian movie, Nosso Lar (Our Home) is based on these ideas. I recommend it to all of you — it’s fascinating, and the music is great — written by composer Philip Glass.

There is so much more that I could write about this topic. I hope this short article has provided food for thought and ideas to explore during your Halloween season!