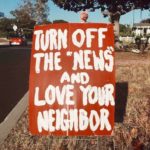 I know that I’m kind of going against the message of this article by even using the “T” word in its title. But the title’s message is so important. It’s the end of the year, a time for reflection. Soon we greet a new year, a time for change. Decide now to free yourself and turn to a new channel.

Don’t worry. You won’t miss a thing except a never-ending background stream of anxiety, anger, and fear. And you will know what’s going on. You won’t be able to escape it unless you live off grid and never talk to anyone. You will find that any tidbit that passes you by isn’t very important for you to know.

You will now have time to think and talk about new things. You’ll also have some new space in your heart and mind (once it is freed from all that anxiety, anger, and fear) to actually do something that helps others. You will become happier and healthier and you’ll sleep better.

I recently read this quote by C.S.Lewis, written after World War II. It could have been written today:

“One mustn’t assume burdens that God does not lay upon us. It is one of the evils of rapid diffusion of news that the sorrows of all the world come to us every morning. I think each village was meant to feel pity for its own sick and poor whom it can help and I doubt if it is the duty of any private person to fix his mind on ills which he cannot help. (This may even become an escape from the works of charity we really can do to those we know). A great many people… do now seem to think that the mere state of being worried is in itself meritorious. I don’t think it is. We must, if it so happens, give our lives for others: but even while we’re doing it, I think we’re meant to enjoy Our Lord and, in Him, our friends, our food, our sleep, our jokes, and the birds’ song and the frosty sunrise….It is very dark: but there’s usually light enough for the next step or so.”

At this darkest time of year, let us dwell on the light. Remember that a constant focus on worry, anxiety, anger, and fear just brings more negativity into our world. It actually feeds what you are trying to resist.

Instead, if you want to create something positive, you must feel and think positive thoughts. As I discuss in Active Consciousness, your world is created by your imagination, your thoughts, your beliefs. This is not pollyanna-ism or ostrich-head-in-the-sand-ism. It’s just the most effective way to get something new and positive accomplished.

How about trying it out as an experiment until New Year’s? Stop reading those Twitter feeds and Facebook posts. You know the ones. Talk to your loved ones. Meditate. Envision the coming year and what you’d like to experience in positive terms. Go outside and breathe. Take a walk. Love your Self. And have a joyous finale to 2018.